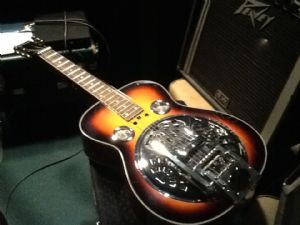 View All Photos In This Album

4 comments on “The new reso”

This monster was built for me in Nashville by that Jackson Steel Guitar Company . Harry and David Jackson are descendants of the legendary Shot Jackson who was my mentor back in the sixties. Along with Oswald and Josh Graves, they were my early inspirations. Later Mike Auldrich and Jerry Douglas continued to inspire me as well as Jimmy Heffernan.

The pitch changing lever opens up a whole new world for experimentation since I came from a pedal steel background..

You can hear this reso on U Tube by typing in Zane King explains the SlideKing Resonator guitar... Listen to his version of Silent Night. You will be impressed !

View All Photos In This Album


Copyright Notice:
The Reso Hangout myHangout photo albums were created to allow members to post photos which 1) they own the copyrights to, or 2) which are non-copyrighted. Please respect others by not posting their copyrighted images. Photos posted in violation of this notice may be removed by the webmaster without prior notice, and may result in a locking of your myHangout account. Read complete copyright policy.