Listening to some Don Rich and the Buckaroos tonight, Who do you figure played the dobro solo on this song ? They nailed it

It starts about the 1 minute mark ,
This song is short and simple but really packs a punch

I have that CD around here somewhere - but finding it is another matter to see if it lists credits.

I'd put money on it being Tom Brumley. It has that sound of a pedal steel player switching to dobro. And Tom played dobro on occasion.

On the All Credits site Jay McDonald is listed on dobro which is possible, but his tenure with the Buckaroos when Don was alive was brief. Tom was there the vast majority of the time. Jay Dee Maness was Buck's steel player for a couple years in the '70s but I'm pre sure it was after Don died tragically in the motorcycle accident.

I like it - it's got that country dobro sound as opposed to bluegrass. Like when Ralph Mooney would pick up a dobro.

Listening to the rest of that album there's plenty of great steel stuff including the dobro work , I wonder if there's a different tuning to get that sound rather than the standard G tuning ? Shot Jackson used a different tuning and I imagine Doug Jernigan had as well , I've heard you can use the e9th tuning to get some single note licks , but unsure of how it would be tuned to make that work .

I listened to it again this morning and I think it is in the key of E. I fooled around with it on my dobro for a while, far from getting it down but it seems pretty doable in regular old Open G.

Maybe because the song is in E, it  joggged your memory about Shot Jackson. But the fact remains that even most pedal steel players when they come out from behind the beast and play dobro, they typically stick with open G like most of the rest of us. That  Shot Jackson used  an E tuning - it was one of those exceptions – sort of like Tut Taylor playing dobro with the flat pick. There's always the occasional exception. Like Greg Booth tuning his 6th string down to E - but the other 5 strings are the same as regular dobro tuning.

Take big dog session pedal steel players in Nashville like Lloyd Green, Bruce Bouton and Dan Dugmore – when those guys play dobro they are in open G like most everyone else.

Or like Tom Brumley, another Bakersfield legend, Ralph Mooney – he played dobro in Open G. Even had the front neck of his pedal steel tuned to G with E9 on the back.

Don Rich and The Buckaroos were one of my favorite early country music bands and remain so to this day.

If I had to bet the farm, I'd guess it was Tom Brumley on dobro. During this period of Buck Owens' musical history, his band found little or no reason to use outide talents on their recordings other than what was already there.

That was Tom, but it sounded more like pedal steel using a wood or soft plastic bar. Could be a dobro simulator in there also.

Don't overlook the possibility of Buck Trent. He played his electric banjo on the HeeHaw show and had that thing all decked out with string benders and Scruggs tuners. He also doubled on dobro. Kind of unlikely, but still worth a thought.

I still think it's a dobro of some kind. A link below to a thread on the Steel Guitar Forum from 2011. I was doing a search there for any Tom Brumley related dobro playing an lo and behold, I supplied a couple posts to this one. Gary Brandin of Newport Beach in southern California, a fine player who some know as the guy who played steel on the Spongebob Squarepants cartoons posed the following question:

Who Played Dobro on the Buckaroos Albums?

Here is the link:   https://bb.steelguitarforum.com/viewtopic.php?t=213229&highlight=brumley

One of the members posted the following:

"According to Tom himself, - he did all the dobro parts during his tenure with the Buckaroos from 1963 to early 1969. I asked him about this during one of my visits with hi .
If information to the contrary can be verified by the players themselves or by studio people, I stand corrected."

Learner brought up the aspect of a softer bar or a dobro simulator on pedal steel. Sheer speculation on my part, but I don't think dobro simulators existed in the '60s, and I have to wonder if pro players back then even thought of using a different bar to emulate a dobro on a pedal steel.

We still think of the dobro as not being a household name when it comes to musical instruments, but it's many times more popular than it was in the '60s. Bandleaders asking steel players if they could supply dobro for a few tunes a night to get  an acoustic vibe is a much more recent thing, and it hasn't been all that many years where simulators and soft bars have been employed so that a pedal steel player doesn't have to lug a dobro with him to a gig. And I still cant's stand the sound of most dobro simulators.

And the sound on the tune in question - I think it's a heavy pedal steel bullet bar. Many steel players use bullet bars that weight 2 to 3 ounces more than a grooved dobro bar. It gives you a different tone than a grooved bar, and pedal steel players who have never switched to a grooved bar while playing dobro often have a different "attack."   A full time pro like Tom Brumley likely played dobro 5% of the time or even less.

in the SGF thread Gary Brandin wrote that a friend of his thought it might be James Burton on dobro which I didn't think was the case. I've heard a lot of James' dobro playing. But the mention of Burton brought to mind Mosrite, which owned the Dobro name and produced the guitars for around 4 years in the mid to late '60s. Photo below of James with some Mosrite Dobros. Mosrite was in Bakersfield, HQ of Buck Owens and the Buckaroos, Burton was in Los Angeles, down the freeway a couple hours away back in those days when traffic was less than horrendous. I've been around a few of those Mosrite Dobros and they can have a different tone than what we're used to or what we hear in our head. I don't doubt that Semie Moseley was supplying Burton, Brumley, et al with some of his Dobros to get them out there. 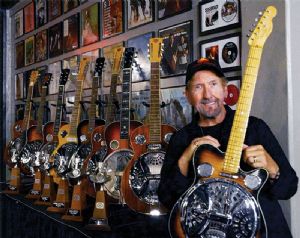 Tom Brumley might be the man on the tunes it sounds like , he has a great flavor on the dobro . The idea of using a bullet bar would make hammer on moves a bit harder I would imagine unless you have good control of the bar , but if that's how that sort of cool scratchy sound on the song was had then I like it !

Those Mosrite dobros are awesome do they make them squareneck or just round neck ? The telecaster looking one is neat .

And on a side note , what are some other songs that these pro pedal steel players did some dobro work ? I only know a few but they sound wonderful , there's a few Doug Jernigan ones , of course these Don Rich songs in that album ,
And then some what o believe is Buddy Emmons playing with Ray Price on " the Heart of Country Music " album

Then there's this wonderful song with Buddy Emmons again

'Please be with me Eric Clapton 461 Ocean Blvd' 3 days