Getting used to my first tricone...

I have a National Triolian single-cone guitar that I love, and have played extensively for the last five years.

Recently I’ve been jonesing for a tricone resonator, as I’ve been curious about the tonal differences (as well as the benefits of having a second reso around to leave in a different tuning, and for emergency backup purposes). But National tricones are expensive AF, and I wasn’t sure if I could manage to save up for one.

Yesterday, I purchased a new Recording King 991 tricone. I had liked what I heard from it in the store, but when I got home...it was that classic, “it sounded different in the shop!” routine. Side by side with my National, there was just no comparison. Now, in some respects, this isn’t surprising (the National cost $2600...the RK was $800). But I’m wondering if what I’m hearing is just me getting used to tricone tone after being so used to the tone of a single cone, or if it is more about RK being somewhat a budget guitar.

The RK has a tinnier sound to it, not as deep as the Triolian. It does seem to give me some nice sustain, of a different flavor than the Triolian. I’m not sure what strings are on the RK now, but I plan to pop some new mediums on there tonight to see if that does anything for me. And the RK doesn’t sound like garbage, it’s just that the tone sounds less deep and full and more “lateral” to me, if that makes any sense. But I’d be curious to know your opinion, fine folks of the Reso Hangout. Thanks in advance!

Generally a tricone will be not as loud as a single biscuit type guitar. The tricones have what many people describe as a sweeter and more complex tone quality. The biscuit bridge single cones have more volume and a more pronounced midrange punch.

I have not owned a RK brand so I canât speak directly about your tricone from experience. I purchased a fairly recent steel body hollow neck National tricone a few years back. Then a 1937 style 1.5 square neck National tricone came my way so I owned both for a period of time. To my ears the German silver 1937 was much sweeter sounding than the newer steel body which was rather brash. I kept the 37 and sold the newer one. I also have a 1935 style O square neck that sounds wonderful with great volume and a big midrange. I find myself playing the style O more often than the tricone as it just possesses more of that bluesy honk that I enjoy.

There are a number of variables between the single and tricone guitars and material matters greatly. I suggest trying to find other tricones in stores, compare and decide what sounds good to you.

I donât know if this is everyoneâs experience, but my experience with my tricone (and itâs an expensive vintage National) when I first played it was that it sounded like a tin can with strings compared to my wood resos. It sounded that way for a long time, and I was about to get rid of it when I decided to try to change the way I play it, and stop playing it like I play my other resos. The intonation, which always sounded out to me, improved vastly when I started to go âbiggerâ on vibrato, because it needs it. The notes decay a lot quicker, so I had to adapt a few other playing habits. I love the sound now, so Iâm really glad I persisted and didnât blame the instrument. Itâs a different animal, and requires a different touch.

Sue, are you talking lap style, with a square neck, or "upright/Spanish,"  either fretted or bottle neck style?

Oh, yeah youâre right Mark, I didnât notice that he was talking roundneck. Thanks for pointing that out.

They do need a little break in time. I find my Republic sounds better after around 15 minutes playing ( its still new). It still has a different sound than my Duolian though.

Unfortunately , my initial hands on exposure to Tri Cone was an excellent condition 1934 National . It blew me away , and all lesser Tri Cones seem lacking by comparison .

For low to medium price range instruments , whatever string- like objects that come with them , should automatically be discarded , and imeadately replaced with a string set with known and appropriate gages , of known brand , in your prefered materials , before even playing .

For low to medium price range instruments , whatever string- like objects that come with them , should automatically be discarded , and imeadately replaced with a string set with known and appropriate gages , of known brand , in your prefered materials , before even playing .

Sage advice. I replaced the strings on the Recording King this evening, and recorded before-and-after Voice Memos of the instrument so I could see how much of a difference the new strings made. The answer is: substantial! I don't know what the stock strings were, or what gauge, but I popped a set of D'Addario phosphor bronze mediums on there, and the tricone is singing!

That said, the frequencies that received the most benefit from the new strings are, to my ear, the highs and mids. The bass is still flabby and loose, and not nearly as present as I'm accustomed to on my National Triolian.

Regardless, I've been getting more and more used to the sound of the RK tricone. Not to generalize for other tricone guitars, but at least in comparing these two instruments, the Triolian is deep...and the RK Tricone is wide. If that makes any sense. The Triolian gives me a gut punch on the low strings; the Tricone gives me a wide, expansive sound from side to side. At least that what my ear tells me.

Tones aside, the biggest difference in playing the two is the much more comfortable neck (and overall feel) of the National, and the enormous difference in weight (I haven't weighed them, but the RK tricone feels at least two pounds heavier...it's brass, vs steel on the National).

Tricones have long had a reputation for weak bass. Some years back Don Young decided to try "scalloping" the T-bridge in a manner similar to the scalloped bracing on a guitar to see if it would make an improvement. To his surprise it noticeably improved bass and midrange. They machined the scallops in for a time but then encorporated them into the casting. The National T-bridge is expensive, but might be worth it to your ears. See below an import copy of the original T-bridge and the scalloped National. 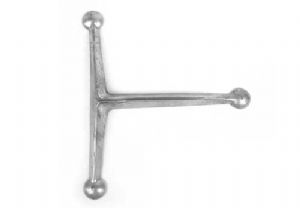 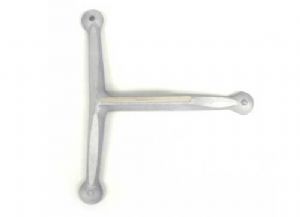 I have both and understand your frustration. The tricone has a softer longer sustain. Your single cone  is brutal, loud in your face. They are just different. You can always swap out the cones in the tricone if you like. I love both the tricone and the single. John D. thought the tr icone  was the best guitar he invented according to an interview he gave years ago.

Hello...first post. I just received my Republic Clarksdale 220r and must say....fun, heavy and leaving nice gouges on my fingertips. That's not a complaint just the result of not being able to put it down. This,to me, is the sound of blues I carry around in my head. Anyway, glad there is a site for these.

'Unboxing my new (to me) dobro and accessories ' 10 hrs