Could someone help me identify?

I have a chance to buy this, but I can't figure out who makes it or the year. I figured the diamond logo inset on the headstock would be a give away, but after a lot of google searches and tons of images viewed, I still can't find it. 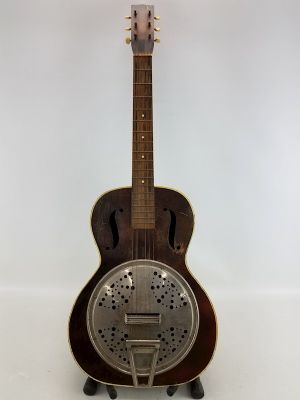 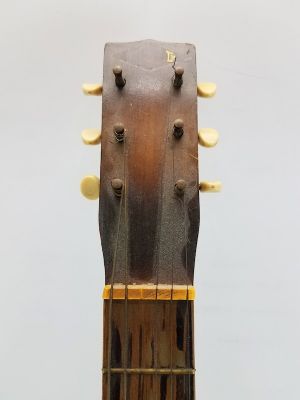 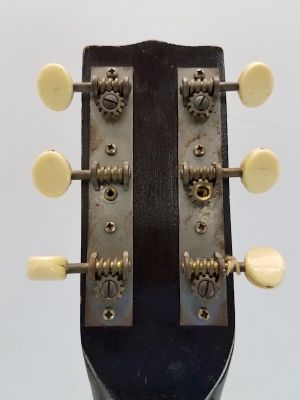 Beware....some of those old, funky, resonator-looking knock-offs donât actually have any resonator cone or spider bridge internals. I canât tell looking at this one but I would save my money towards something that is more likely to be functional....unless youâre looking for a mere decoration.

Thanks, I just started getting into finding auction and thrift instruments and it's something of a mess.


I found this for sale, not sure what it is, same as with the guitar I just posted. The headstock (not the stripe) and the frets, and the bridge (minus the doves) match the gibson dove, but I can't find a match with it other than a random other image I saw, no clue who makes it.

I have gotten to see a lot of very nice and cool instruments though, it's a blast. I think I want to own 1-5 of everything :P Picked up 50s flute on a whim tonight, lolol. 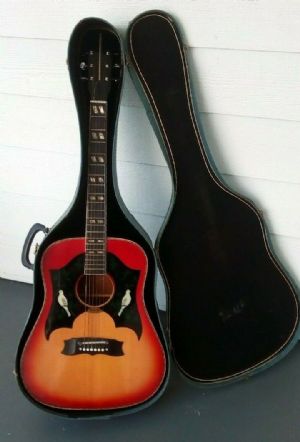 Is the resonator here in the U.S. or in the U.K.? This reminds me of one a member was looking into recently but I can't find the thread.

Looks like it could have been built by Regal in the mid 1930s as a contract for a department store brand. As Eric wrote, might not even have a cone. Weirdly shaped headstock. Might be more trouble than it's worth.

The second guitar looks old enough to be a fake Gibson Dove from the "lawsuit era" which could be the 1970s.  Might even be a decent playing guitar but you have no way of knowing until it's across your lap.

There is an industry of Chinese made counterfeit Martins and Gibsons in the modern era. I get a kick out of how the  latter is referred: "Chibson"

I think the resonator is a regal made instrument from 1936 - end of production, a low end student model for some distributor. If it has a cone, that is. Should have a cone and a No 14 spider. Probably set neck and no sound well - it has an aura about it that is very similar to my Model 25 from around 1935.

I'm in the no-cone "Faux-bro" camp. Might make a nice $20 wall-hanger, otherwise it's a no-go. The Dove looks like a complete fake. Back in the Vietnam war era, American soldiers brought back a lot of really poor knockoffs - this might be one of them. Again, no value that I can see, YMMV.

On second thought, it could also be a Kay faux bro from the 1930s.

I'm with badger - it's wall hanger material if you're going for that "rustic look."

'Please be with me Eric Clapton 461 Ocean Blvd' 2 days