I'm taking the plunge in buying my first vintage dobro for myself. Found one on reverb that I like. The guy says he doesn't know the model and that it's from the 1930s. There is an inscription on the metal plate stating its licensed by the National Dobro corp.

I was wondering if you could help in identifying its actually vintage and if so then what model and price range it should be in.

Also it has a 4 leg single cone so not sure if it's biscuit or spider bridge.

Any help in identifying any details would be appreciated. 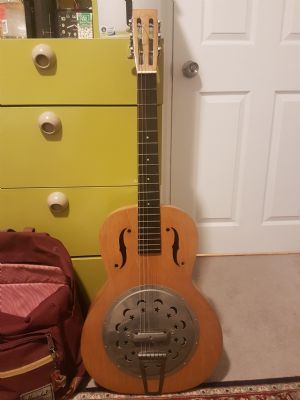 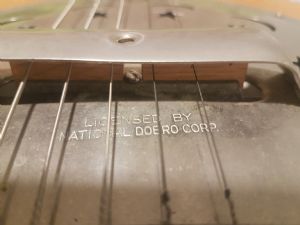 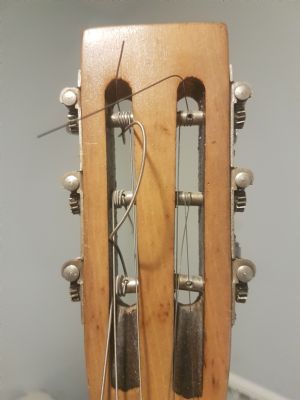 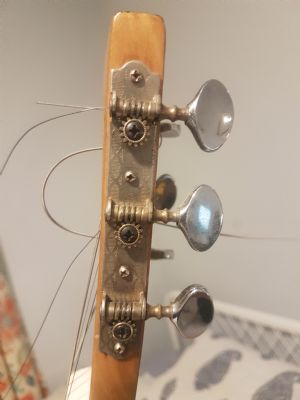 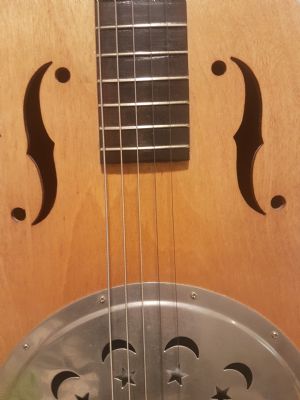 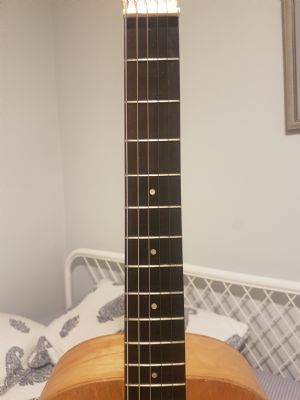 As a playing guitar this is probably not the best choice. More of a curiosity or wall hanger in my opinion. Looks like a model 19, sold by Sears or numerous other outlets at the time. Value ? maybe a few hundred bucks to a collector.

With that coverplate and the statement that is has a  it might not even be a Model 19, it could be a Model 6.

"Four-legged cone"...Not sure what the seller is referring to here. It is definitely a spider cone guitar - he could be referring to the spider which might have four "legs" rather than the typical eight.

The model 6 had smaller  than normal cone with parts that were interchangeable with Dobro mandolins from the late 1930s.

Poor editing job above and too late to fix the first sentence, time had run out on me when I noticed the mistake. I was referring to "four-legged cone" which I addressed in the second paragraph.

I am on my computer now rather than iPhone, and in looking at the diameter of the coverplate in relation to the overall shape I would say it's definitely a Model 6.

Could sound good, of course there's no way of knowing unless one were to pull the trigger and buy it. That being the case, for myself, I would steer clear.  When people go on the hunt for prewar Dobros, this is not a model where they send out the hounds to track one down. Some of the most desirable are the Model 27 and 37 built by Regal around 1935 and later. Of course they go for a lot more money.  And it looks to me like this guitar has been stripped and refinished which in the case of vintage guitar collecting is generally a no-no.

Below is a reproduction of a page from a Dobro catalog circa 1939 with an illustration of this model. I borrowed this from Steve Toth's excellent book, Dobro Roots which was published in 2014. 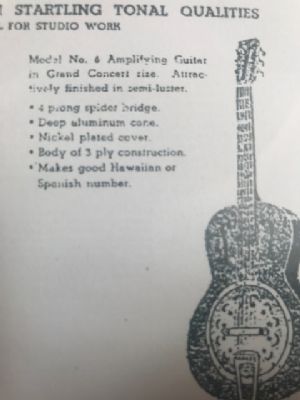 Thanks for the valuable input guys.

Mark you have a real eye for identifying these vintage beauties. You're right it is a model 6.so hard to find good information on vintage dobros.

Especially first hand experience compared to random internet pricing. It's quite a fascinating history regardless of how good the guitars are. Will definitely take your advice on this one. I thought it might be a good starter dobro. But maybe not. Might wait for one of those regals you are talking about.

Yeah - it's a fascinating history. But the term we like to use it "the convoluted history of the Dobro guitar."

The record keeping seemed to be a little sketchy, and the company went through many changes back in those days, so as interested observers and armchair historians it's difficult to keep it all straight.

The comparison I like to make is to C.F. Martin - the record keeping through the company's history is meticulous - and it goes back to 1833!

That's interesting, there is a National version of that too called a Rosita. It has a smaller cone also but its a biscuit. 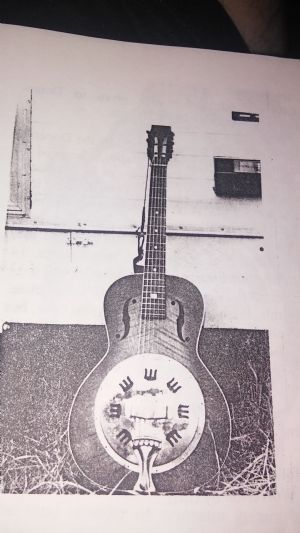 'Need ID on old Dobro i picked up' 2 days