Help with year of OMI Dobro

Hello everyone,
Just got my first dobro and a bit unsure on the year. The headstock reads: D 278 5. The gentleman I bought it from said it was an early 80's model once owned by Phil Leadbetter. Any help would be great.

Hey Jimmy, is by chance your Dobro a blonde that looks like this? 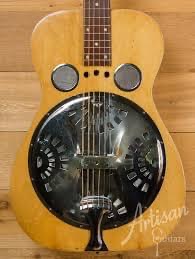 It was purchased from Artisan Guitars

I had one of those, a 1976. beautiful like new instrument. I had Junior Barber set it up for me with a Quarterman QC-4 cone. Kind of wish I'd kept it. Had too many and was running out of room. (GAS)

I don't know how "married" you are to this guitar but it was apparently Phil Leadbetter's first Dobro when he began playing in the '70s.

He has been trying to track it down to reacquire it if possible. Phil doesn't post here very often but he is a member.  Would you be willing to have a conversation with him regarding this guitar?

It would be my pleasure

This is Phil Leadbetter. There is a chance that might be my first guitar. I saw it a year ago at Artisan. Does the case have my name on it? I know the case was really worn out and brown. I had painted it when I was a kid. Would like to talk to you more about it, and see if it might be the one I had. Can you send me your number at : philibuster1@yahoo.com
Thank you !!

Sent you an email Phil