I just picked up what I believe to be an El Monte built Dobro. The logo is a variation of the "db" seen on some. There is no lyre. I can't find any mention of El Monte era serial numbers.

There's not a whole lot out there on these DB Originals.

Ed and Rudy Dopyera were making some Dobros 1962-1964 in El Monte under the logo which were distributed by Standel, the well known amplifier company that wanted to expand into the musical instrument business.

I gleaned the following from Gruhn's Guide to Vintage Guitars:

Number is pressed into top of peghead. Series begins with 001. Production is estimated at 31 or 32 per month. No number list is available."

Another chapter in the convoluted history of the Dobro guitar.

Scott, what is the serial number on your guitar? 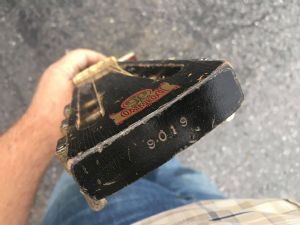 Would Luv to see more Pics !

Here's some more. It appears to be an El Monte, and I'm now wondering if it might have been made from pre war parts? And if so, could the serial number have been stamped "then" as opposed to the early 60s? And would the rounded headstock slots make this a Regal made neck? I'm full of questions. 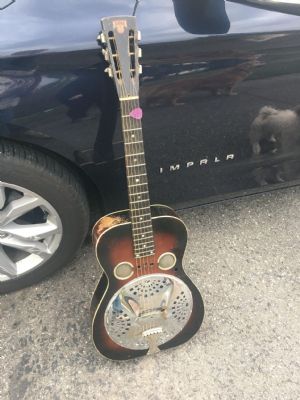 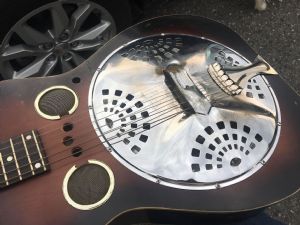 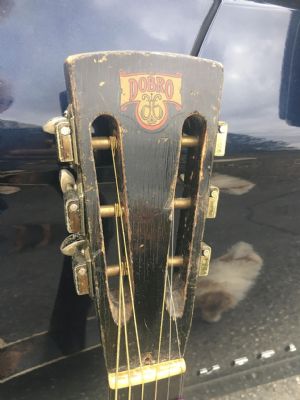 Actually Scott, it's pretty difficult to see the logo since we haven't seen the guitar before and don't know exactly what we are looking at like you do.

Looking down from the angle you show  I can't really tell what it is. More photos of the guitar from different angles would be great.


It sure doesn't look like one of the guitars I discussed in my earlier post, and the serial number doesn't go with that group of guitars. What is it  that makes you think it's from the El Monte era? Before the agreement with Standel they made some guitars there beginning in 1959 from leftover parts that apparently had  been warehoused  prior to the beginning of World War 2.

I was typing my last post, and now I see the new photos you just posted.

I would say because of the "oddball" headstock logo that it is indeed an El Monte Dobro, and from that 1959-62 era when the brother were making guitars from leftover parts.

And yes, most likely Regal-built in the mid to late 1930s. I was looking at serial numbers in Steve Toth's book Dobro Roots and there are a couple of Regal-builts in the high eight thousands.

Unless the tuning machines are replacements I don't think I have ever seen any like that on a pre WWII Dobro.

I've come to the conclusion over the years that they would make necks then stamp a serial numbers on them but it would then go into a stockpile for later use.

According to Mike Replogle who ran Dobro in Huntington Beach after Gibson took over in 1993, this was not an unusual practice  even during the OMI Dobro years from the '70s to the early '90s.

The tuners are old Klusons and my guess is that they were swapped out at some later date. They're mounted kinda sloppily. This guitar has had some questionable repairs and I will be un-doing a couple things. I'm not the least bit concerned about the drilled holes and the modified screens; those, along with the battle scars, are just signs of use. The shim under the fretboard extension however, needs to go. Someone put 'too thick' a shim under there and created a ski slope. They also filled two of the screw holes with filler (two of the four screws normally hidden under pearl dots). The neck may need to be reset to get a better break angle over the saddle and I will deal with that.

Sounds like you have some work ahead of you. It will be a nice guitar no doubt when you're done.

If you are on Facebook, Steven Vowles shared a chapter on National/Dobro/Valco on the Dobroholics page from American Guitars: An Illustrated History by Tom Wheeler Copyright 1982.

A paragraph on the El Monte years and later the sale of the Dobro brand to Mosrite for several years in the '60s, and how there was some bad blood in the family over this. 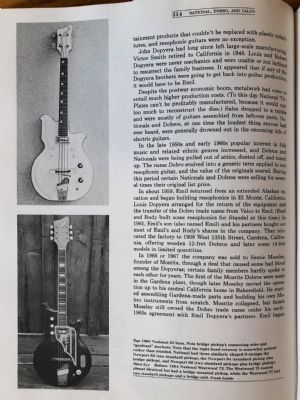 'How do you all keep track of where you've been in the Forum Section.. ' 2 days