Anybody played a Beard Deco-Phonic 47 squareneck ??

I'm intrigued by the new Beard Deco Phonic 47 squareneck reso.
Has anyone had chance to play one? I think it would be perfect for bluesy and jazz material.
I'm assuming it could handle open D as well as DBDGBD (low G tuning) Probably not high G (GBDGBD)- correct?
I've always had spider bridge reso's, so a squareneck with a biscuit bridge would provide a whole new sonic range.
Any idea if it would handle the 56-17 gauge strings I'm used to?? I have an email in to Beard, but of course they're closed this weekend.

Any shared insights or actual experiences with this particular model would be greatly appreciated.

Thanks in advance
Kelly

https://www.resohangout.com/archive/49529
I posted about these a couple years ago. Doesn't seem to be much interest.

"I'm intrigued by the new Beard Deco Phonic 47 squareneck reso....
Any shared insights or actual experiences with this particular model would be greatly appreciated."

I also find them very intriguing. I'm sure you've heard Mike Witcher's demo of this guitar, with it tuned to D. Construction is the same as Deco 27 except for the cone and mount - so I would presume anything the regular Beard Deco squarenecks could handle, it could as well.

I'm waiting until I win the lottery before I buy mine.

I was able to play the roundneck version about a year ago, but haven't come across the squareneck  "in the wild."

If I had money burning a hole in my pocket I might have bought the roundneck, I really liked it. But that particular version is of course in direct competition with wood body biscuit bridge guitars from National, and if I were serious,  that would complicate things regarding such a decision.

I would be pretty surprised if the recommendation from Beard was that one should avoid GBDGBD with a typical dobro string set like 17-56 on the squareneck Model 47.  The caution for staying away from that tuning and those string gauges  historically applies to roundneck guitars. I'm with Doug in thinking  that just because it's the biscuit bridge system with the inverted cone, high bass G wouldn't make any difference to the health and well being of the guitar.

If it were in fact the case that Paul thinks GBDGBD is a bad idea, if I were him I would have a warning in ALL CAPS explaining as much on the Beard website, and a hang tag on the guitar in retail shops with that caution.

The reality is that many, and maybe even the majority of lap style dobro players rarely venture out of GBDGBD. If you had to stick with a lower tuning on this model then that's going to likely limit the appeal and turn off a lot of potential buyers.

There's no reason to avoid dobro G tuning. If you dig back you'll see that National has offered squareneck variations (Style O) through the years and even Gold Tone offered the GRS-SQ and GRB-SQ models as recently as a few years ago.

I've used both the National and Gold Tone (loaners).

If you want that kind of sound just get it. 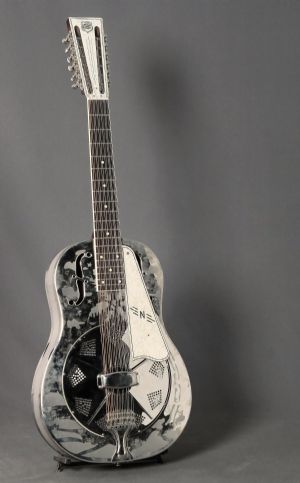 Received the following information directly from Beard regarding the guitar:

Any dobro Style String gauge set will be fine for this instrument.
GBDGBD is fine, It is designed to played like a standard square neck resonator.
5 Year Warranty on workmanship.

I will be picking up the guitar on Wed or Thursday and will post my impressions after I've played it.

Thanks for all the comments.
Kelly

Congrats on the new horn. You can put whatever tuning you want on it of course, but it really seems to lend itself to that old Swampy blues thang in open D. At least that's what I'd put on it. I guess you can tune it up and down if need be but I in my case, I also have spiders for standard G dobro tuning....Enjoy.

Well, I've had the DP 47 SQ for a few days now and have no regrets about the purchase.
It has a totally different sound, which is what I wanted. I've played it in both open D and the GBDGBD tuning
and am pleased with both the tone and the volume. Less volume and sustain than my Vintage R, but it has that wonderful bluesy sound I was seeking. The construction and finish is immaculate as would be expected from Beard.
It is definitely not a bluegrass reso, but for blues and some jazz tunes it's delightful.
Thanks for all your input and advice.

Hey, thanks for the update. Your comments confirm what I suspected based on Mike Witcher's test on Youtube, and make me want one more now! Oh well, maybe I should learn to play all the instruments I already have....

Thanks for the info Kelly. Very helpful. Interesting about the sustain and volume as compared to the R guitar. Still want one to fill the need for that specific sound. Maybe down the road. We'll see.

'Anyone Have Any Experience with Beard Customer Service?' 6 days