Identification help on a 1930s model

I'm helping a friend sell a pre-war Dobro he bought in 1972 - from Rudy Dopyera himself. It has been sitting unplayed in a case since that day & we opened it up today & took some photos. Is this a model 85? The ser# reads D 3874 - which looks like 1930's based on my research. It's a round neck. It also has a pickup!

Does the "D" signify anthing? I have attached some photos & would be grateful for any help in telling me just what model it is - but I suspect a model 85. My friend even has a photo from that day.

Any information much appreciated! 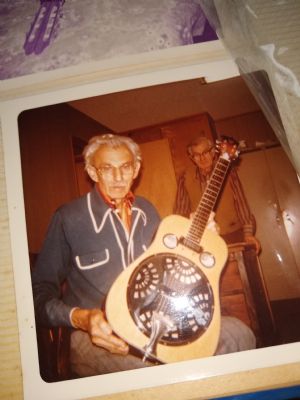 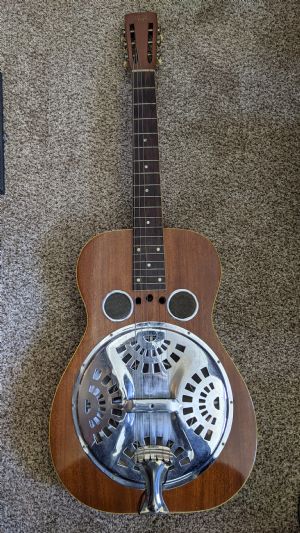 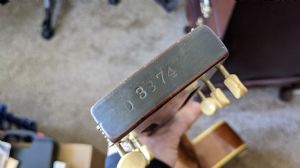 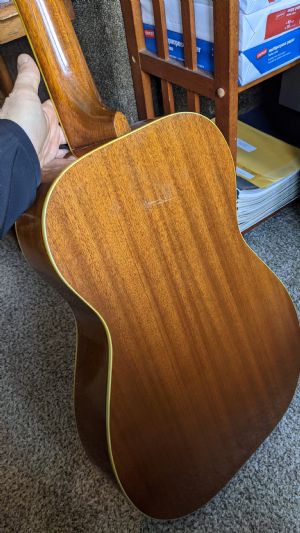 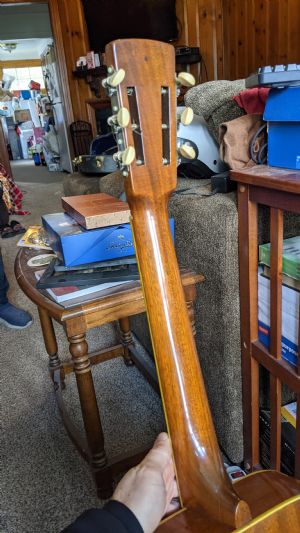 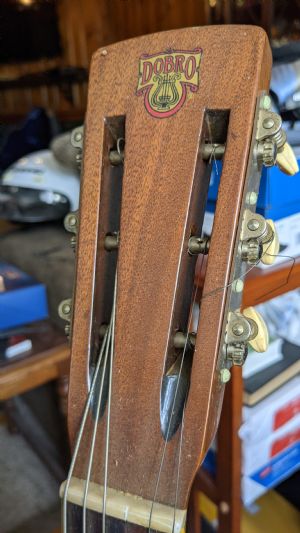 The "D" signifies wood body - but I don't think they started using it as part of the serial number until the OMI Dobro era, a couple years after the Dopyeras regained the use of the brand name around 1970.

The squared off slots at the end of the headstock indicate an early '30s Los Angeles guitar. Same as on my Model 37 from that era. The serial number is close to my guitar, which is #3675. No "D" on mine.

The wood on the Model 85 in Steve Toth's book Dobro Roots is identical, it is known as Ribbon Tobasco Mahogany.  Different fretboard - your friend's fretboard  is darker.

Too much glare in your photo - is there a coverplate screw at the 12 o'clock position?

I would say it is in fact a Model 85, likely built in the early 1930s, and maybe Rudy had this one stashed somewhere for close to 40 years. Then in keeping with his new at the time serial number scheme he stamped the "D" on the headstock.

That is one beautiful Dobro. I am green with envy!

Yes the resonator plate screws are at the hour positions, which I have read were shifted in 1934 in order to enable removal while still keeping the tailpiece on.

Fascinating re the retro numbering from the 70s - I think that could very well be.

Tough question - if I were to sell this, what would be a fair price?

Not holding anyone to anything - but seeing comparable model 85s online in the 3-4k range that do not appear to be as well preserved, I'd be curious to hear what I might want to list it for.