I purchased the livestream from the Denver stop on the tour several weeks ago and it was superb. Great camera work and sound quality. With my headphones on while watching on my computer it was almost like being there.

And you can revisit the broadcast for 48 hours after the conclusion of the concert.

For this Ryman show Bela and the boys  will be joined by some other great pickers, some of whom were on a two week stint prior to the tour with the "old timers."

I watched that set from the online Hardly Strictly Bluegrass festival in San Francisco - no audience for the second year in a row due to the pandemic - and it was also excellent, with Sierra Hull, Justin Moses, Michael Cleveland, and Mark Schatz in the group.

I just saw in the website that the replay is available for 24 hours this time, not 48 hours like the Denver broadcast from several weeks ago. 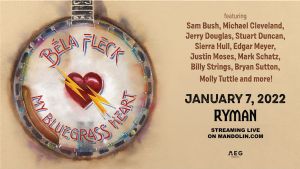 Postponed until Saturday evening due to some fairly extreme weather conditions in Tennessee.

Just jumped in to add that I was there at the Ryman. Yes, the weather was bad on Thursday -- our flight was canceled, so just as well the show got moved. Unbelievable performances by everyone. Jerry was, well, Jerry, and Justin did a bang up job.

It was also great how the groups kept morphing -- one or two players would switch out at the end of songs, and the next ones would step right up. For the encores, Tony Trischka joined in on banjo!

The crew was going to Carnegie Hall the next night -- did anyone see that one?

2. It was also great how the groups kept morphing -- one or two players would switch out at the end of songs, and the next ones would step right up.

3. For the encores, Tony Trischka joined in on banjo!

I was there, too! What a night.

1. The most amazing part of Justin's night was his play not only dobro next to Jerry Douglas, but also on fiddle next to Stuart Duncan and Michael Cleveland, and on banjo next to Bela and Tony.

2. I assumed Bela would play one set with one group, and then a set with the other, with the special guests popping in for an occasional piece. I was very surprised the way they wove each player in one at a time. In fact, was it the second song of the night where the members of the band switched out one at a time in the middle of the song? When Mark Schatz came out early be mistake?

3. Did Tony only come out during the encores? I thought he had been out earlier.

Also, Bela has such a dry, understated sense of humor. He walked out for the (very thunderous) encore and said, "Hey, I just found out that some of these people can sing. Do you want to hear them?"

Hey, Todd, I think youâre right - Tony came on just before the end of the main set, then came back for the encore.

So cool to see so many of these superstars in one place. And Sam sang When the Storm is Over! I loved how he got this huge smile when Sierra took a solo.

Loved being able to hear everyoneâs styles, and everyone supported the songs so weâll.

That's an interesting comment about Billy Strings. I take that to mean he's doing an excellent job of bringing new (and younger) listeners into bluegrass/ new acoustic music. Those folks may have not known any of the other players when they arrived but I'll bet they knew them when they left!