I generally work on banjos & fiddles but, somehow, a "Weiser Special" resonator guitar has snuck into my workshop. I'm not familiar with the "Weiser" brand, and this guitar looks like and is built like a lot of mid-1900's, mass-produced instruments. It has a 9" single cone, stenciled peghead art.

Is anyone familiar with a "Weiser Special" reso guitar ? I'm especially interested in finding out whether or not the neck attaches to the upper block using a dovetail. The upper block looks pretty thin, and the neck + block are loose.

If its a stencil, pictures might help us figure out who actually built it.

tnx for the suggestion, here are some pics: 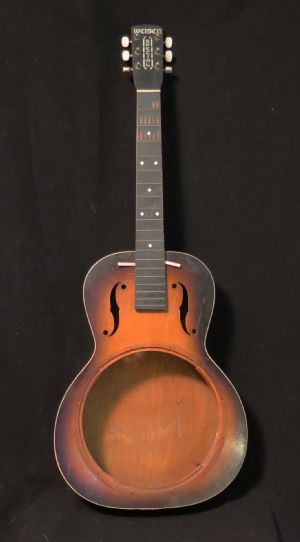 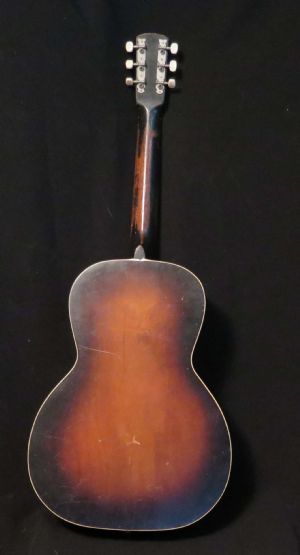 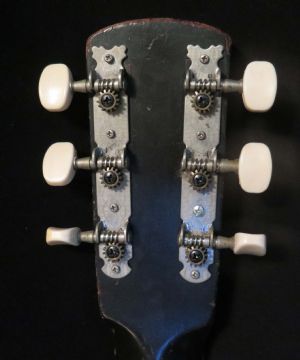 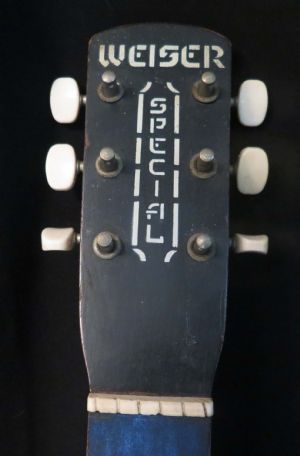 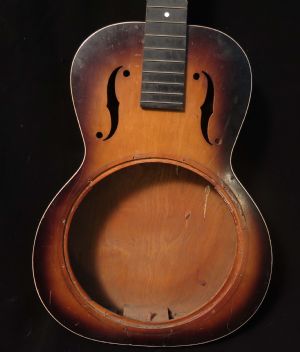 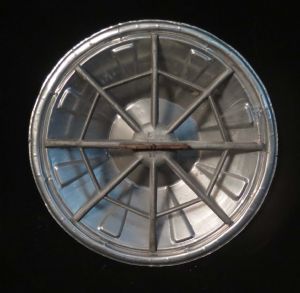 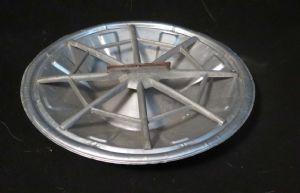 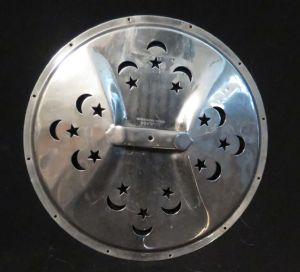 There was a company called Bacon & Day that was known primarily for banjos, some with "Weiser" on the headstock.

They came out with some guitars, but I believe they were mostly contracted out to other builders, like Regal of Chicago.  Regal was  licensed to build Dobros from the  early 1930s to just prior to the beginning of World War II, when production ceased because  the metal was needed for the war effort. Sometimes there was a Regal logo on the headstock but more often it was the Dobro logo.

Regal-built Dobros sometimes had other names on the headstock like this Weiser. They made guitars for big retailers, often  headquartered in Chicago like Montgomery Ward and Sears, along with music schools.  This guitar would likely  be the Regal/Dobro equivalent of a Model 19, sort of an entry level model.

It appears to be in pretty good shape and has the classic lug cone like my 1933 Model 37 Dobro.

It's a roundneck designed for conventional playing, and not a squareneck for strictly lap style. Of course many roundneck Dobros were converted to lap style with a nut riser, typically made of metal.

They started building some of the guitars with solid instead of slotted headstocks around 1935, so it is from that year or a little later.

And great job on the photos, very clear and professional!

I was worried about hurting the top by removing the neck without knowing how the neck was joined to the body, so I removed the fret at the junction with the body then removed the fingerboard on the body. A little bit of splintering at the fret removal, but not excessive and easily repairable . Not surprisingly, the guitar does use a dovetail to join the neck to the body and there is an opening in the top to accomodate the dovetail. I've seen better dovetail fitting..... this one has a lot of daylight between the top of the dovetail and the block. A good candidate to clean out the old glue & fit a maple splint to adjust the action before re-gluing.

Tnx for the info on Regal. I've had a couple of Bacon banjos.... they're generally very well made. And tnx for the kind words about the photos..... I spent an afternoon with a pro photographer a few years ago and learned some of her tricks. 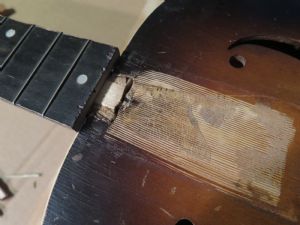 Ouch - this guitar left the factory with a dovetail that was mostly cut off (likely in response to the neck being broken off), converted into a mortise & tenon joint, and shimmed to occupy the empty space. Good thing I'm retired and doing this for a friend....... I like a challenge. 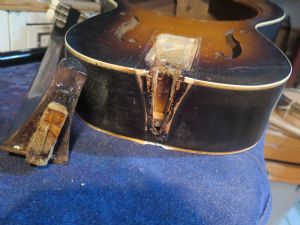 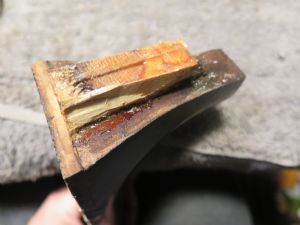 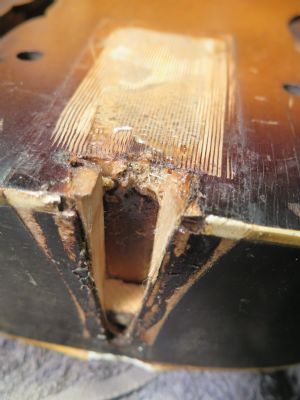 Cool, your well on your way i see. That should be a decent sounding old guitar when your done, a Bluesman special!

Does the cover plate have the patent and "other patents pending" stamp next to the bridge cover? That would make you think it's a Regal made instrument from the Dobro era, for sure. Aside from the headstock it's a dead ringer for my 1935 Model 25, #14 full diameter spider, lugged cone and all. Different tuners and cover plate, though.

Brian - Tnx for the input...... yes, "1896484" and "OTHER PATS.PEND" next to the bridge cover. I also found a listing for a 1939 Regal Dobro Sunburst that has a slotted peghead, not solid like the OP guitar.  The 1939 guitar at this link has a stars and crescents design on the cover like the OP guitar.

The photos of the dovetail almost look like a small colony of termites took up residence at one point.

I have a guitar like this in the project pile. I bought it in pieces at a garage sale for $5 in 1995, finish removed, with pat pending coverplate, lug cone and short spider, cone shelf missing. I put it back together, set it up with a high nut. A good sounding box. Unfortunately, its dovetail joint was also weak, and ultimately its downfall. It will be converted to a bolt-on when I put it back together. 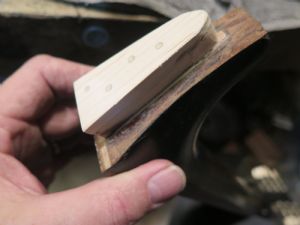 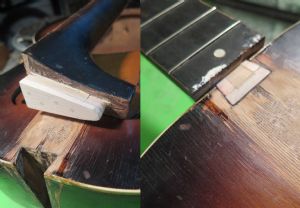 Thank you for the updates and keep them coming- I'm quite enjoying following your progress.