Hi there,
I am hoping someone can identify my Dobro. Bought it years ago from someone who reckons they found it in Grandpaâs wardrobe.
Itâs a lovely instrument whatever it is. 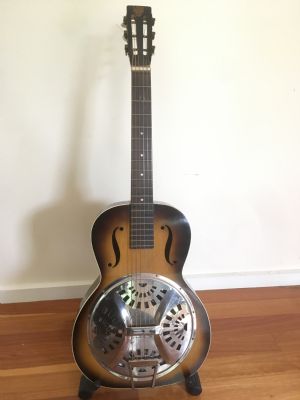 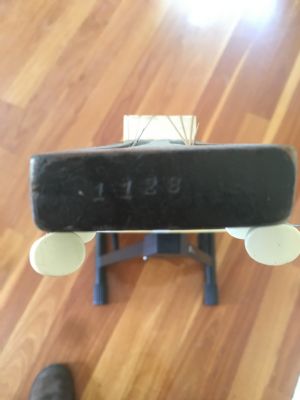 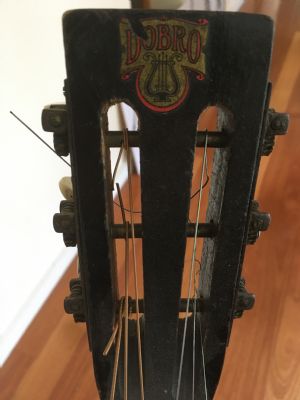 Dobro licensed Regal of Chicago to build Dobros in the early 1930s. The initial idea was Regal would handle manufacturing, sales and distribution to the eastern half of the United States, and Dobro of Los Angeles would take care of the western half.

By the late 1930s Regal took over all manufacturing until production ceased just prior to WWII because metal was required for the war effort and there was none to be had for these guitars.

Does it have a round neck designed for conventional playing, or a squareneck for strictly lap style?

Looks like it has a "tall" nut for lap style, but a lot of the old roundneck Dobros were often set up that way by the eventual owners.

It has a square neck and the tall nut may be a
customization.

I would put it as a Model 25 around 1936 or earlier, the headstock slots are rounded, suggesting Chicago/Regal made, the tuners appear to be an earlier post design than on my 1935 Model 25, squareneck would have had a tallish nut, so may well be original. Coverplate screw holes are offset, so it's not real early, it should have a patent number and "other patents pending" stamped on the cone cover. It should have a #14 spider and maybe a lugged cone. Nice guitar, to be very sure! facebook.com/photo?fbid=339913...022578349

Thanks for that! Itâs great to see the catalog too.
I have attached a photo of the cone cover with the patent#. 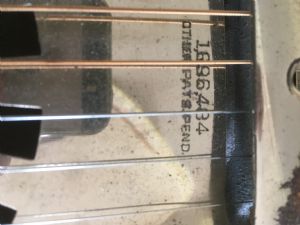