First post and new to reso guitar. I purchased a recording king Phil Led better model to get started with and failed to consider nut width. Consequently I'm having trouble staying off adjacent strings with the picking hand. Should I consider trading for an instrument with a wider nut or just stay the course and keep working with what I have.

Welcome Slider, and it would be nice if you added at least your first name under your “handle.”

There seems to be two schools of thought re the nut width on the Leadbetter model. Some players can roll with it while others are bothered by it. I can't go into the entire  spiel right now, but check out my post below from  a thread back in March, along with photos.

“ There is a good dobro group on Facebook that has been around for about eight years called Dobroholics. Conversion work in the photos below to fit a wide nut on a somewhat narrow neck.

The fellow's name is Matthew Butner. He purchased a Recording King Phil Leadbetter model that is a really nice guitar for the money, and one of the best Asian-built spider bridge reso guitars.

RK designed this guitar with a 1 3/4" wide nut - a curious choice since it is a typical width for a flattop acoustic, but a little too narrow for many lap style players.

Matthew wanted a wider nut so he ordered a pre-slotted squareneck nut from Resophonic Outfitters. He "shaved" the ends with a Dremel tool so that they wouldn't extend beyond the neck once installed in the slot. He posted that it was around a half hour project and works fine. ” 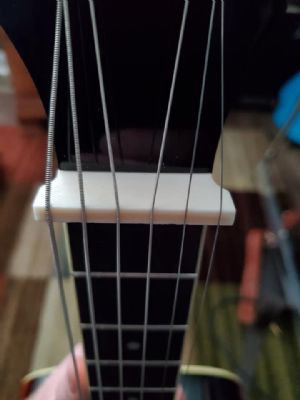 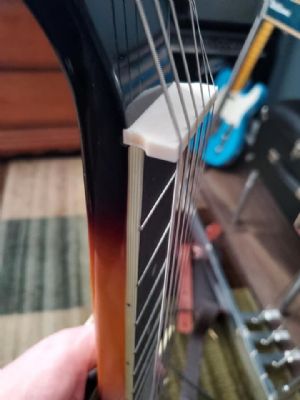 I agree with replacing the nut scenario, relatively simple and effective. Years ago I did the same on my OMI Dobro 8-string. The nut from the factory was a bit narrow for my tastes, so I just put a wider nut on it.

Iâve also done a nut conversion similar to what Mark and Jack describe. Just be aware your top string may be âfloating out in spaceâ (visually) without a fretboard background for orientation. This may be a complete non-issue for youâ¦but perhaps not.

Iâm with you. Personally, If Iâm not at 1 7/8â nut width, my playing is affected. Or more specifically, if I get grooved in on a particular string spacing, I have temporary troubles shifting to different spacings/guitars.

You could always do the cheapo nut fix for now, and consider the more standard wider options if deciding to upgrade guitars at some point.

If you’re having trouble keeping off adjacent strings with your picking hand, the spacing is more critical at the bridge. This is my opinion. The strings will taper from the nut to the bridge and, I will bet, increasing the spacing at the nut will make a negligible difference at the bridge. Its geometry. I would simply work with what you’ve got and learn to tame your picking to land on the appropriate string. My opinion.....but think about it.  You’re talking about increasing the nut width by about 1/8” using the dimensions discussed above. Split that amount into five increments between the six strings. Now diminish that dimension by triangulating up the fretboard to the bridge....??

The remarkable thing about the human brain is how stringed instrument players can detect minute differences in setups. I have flattop guitars with 1 11/16" nuts and others with 1 3/4" nuts. A difference of 1/16" in width - and it is definitely noticeable.

I measured my Leadbetter this morning and the bridge spacing is actually a hair *wider* than on my RR-60-VS! The strings are not parallel, as it were. The wider nut should result in perfect "standard" spacing. I think a new nut is in my near future.

I know for myself the first and sixth strings hanging slightly over the edges of the fretboard with the modified nut might bug me.

Do you think just in a "looking strange" kind of way, or could there be any stability issues? Any thoughts?

Upon my return to the reso square neck I purchased a RK Leadbetter. Great workmanship, tone, etc. I too had trouble with the string spacing, but sort of adjusted to it in time. Then after a forced layoff I again had trouble with the string spacing. So.........I sold it and bought a different instrument with only slightly wider string spacing. I have had no issues since. I somehow just couldn't modify the nut and bridge insert as in the photos Mark provided. Didn't know how it could affect the resale. So, to the OP, I guess you could go either direction . Seems to be a money game. I've always been a buy high/sell low kind of guy so... YMMV

Do you think just in a "looking strange" kind of way, or could there be any stability issues? Any thoughts?

I guess the guy to ask would be Matthew Butner who shared  the nut conversion on Facebook. Off the top of my head  it seems like it would be plenty stable - but I'm looking down at the fretboard on my Clinesmith, and I'm having a a bit of a hard hard time imagining  the idea of those two strings hanging slightly over the edges.

Upon my return to the reso square neck I purchased a RK Leadbetter. Great workmanship, tone, etc. I too had trouble with the string spacing, but sort of adjusted to it in time. Then after a forced layoff I again had trouble with the string spacing. So.........I sold it and bought a different instrument with only slightly wider string spacing. I have had no issues since. I somehow just couldn't modify the nut and bridge insert as in the photos Mark provided. Didn't know how it could affect the resale. So, to the OP, I guess you could go either direction . Seems to be a money game. I've always been a buy high/sell low kind of guy so... YMMV

As far as resale with a replacement wider nut - even with my low level "shade tree" luthier skills I have replaced a few nuts over the years so it's not a big deal.  One could always remove the wide one and reinstall the original.

I have played only two of those Leadbetter models in stores and it's been quite awhile, but I really liked them both. I don't recall thinking the narrow nut was that big a deal, but these were test drives of several minutes each. I guess if I owned one I would either get used to the nut - or like some others the string spacing might bug me after awhile.

When Todd Clinesmith built me an 8 string lap steel a few years ago he actually made sure the string spacing was closer to my dobro so that it wouldn't be a weird transition.

Wow. I just measured, and the total difference of string "width" or "span" at the nut is only 3 millimeters. At the average area over the cover plate where my fingers fall, there is hardly a difference.

It seems that, indeed, the tailpiece and bridge factor in much more than does the nut - in terms of the right hand, anyway.

I think y'all are going overboard on this.

Just learn how to play. You'll be fumbling through ANY string spacing. Trust me. It'll feel like you're wearing mittens..

Worry about this when you've actually developed some technique.

No. No problems here.

A 40+ year guitar player, I've only been taking lessons on dobro for a little over 2 years.

I am only marveling over how the simple use of a lowly metric ruler has put to rest any thoughts that one of my resonators should be harder to play!

It takes a lot to teach a simple-minded Polish kid like me a lesson, Howard. Thanks for your patience!   ;)

Thanks for the responses everyone. Some interesting ideas and I think sound advice from hlpdobro. When I first learned clawhammer banjo switching to an instrument with a wider nut made a remarkable difference but it was an 1/2" wider and the difference in string spacing was readily apparent. That is where my question concerning Dobro originated.

'Finding the Melody of a Song' 16 hrs

'Looking for Paddy on The Turnpike tab' 2 days